DIFFUSED SHAREHOLDERS AND THE MARKET

The market is often spoken about, and the fact that the market decrees the success of a publicly quoted company. But it is never explained how this market works, what it consists of, and who are the agents that constitute it. It is said that the market is in crisis, but the truth is that today the economy, in the sense of raw material/energy consumption and related production output, is working very well ! ! ! There is a huge wealth generated, and the offer of good and service is abundant and far superior to the demand of the people. There is a problem of allocation of this over generated wealth, as following this economic system the benefits of the hard work of the 99% of the people are assigned to just a 1% of happy few. 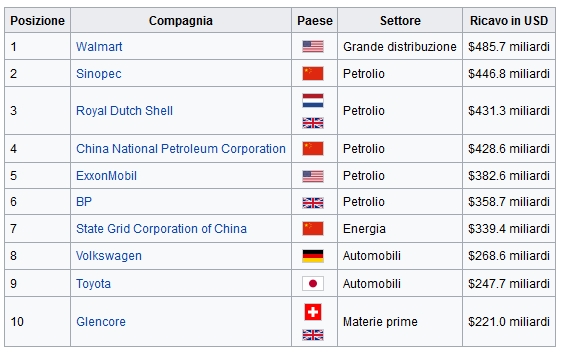 As you can see looking at the billion of dollars of profits done by the major global companies every year from the Fortune and Forbes lists.  The realt fact, well kept silent by mainstream media, is that all coutries around the world can be runned under two different model of development, each ruled by a few simple rules.

A PRO 1% MODEL OF DEVELOPMENT: NEOLIBERALISM
A PRO 1% SYSTEM, < < NEOLIBERAL> > MODEL: 1. The issue of money is delegated to private banking system. In this system the State has renounced to the prerogative of issuing money free of debt i.e. at zero cost and to pay for services and infrastructures that make run the economy. Private banking system issues electronic money out of thin air (in Italy 97% of all the money in the economy, while only 3% is isuued by Central Bank) as a debt, on which of an interest has to be paid. So all the wealth is mathematically reversed into financial institutions. In doing so these financial institutions get an huge amount of wealth given by interests and they are put in the condition to buy the majority of real economy, like manufacturing and real estate companies. 2. Legislative protection with fiscal advantages for the big ones. Owing the debt of many politcal parties and of companies involved with the same political parties (see spoils system) then they are able to pilot the political system. Thus the Government makes laws that protect them (see revolving doors), strarting form the banning of the Glass Steagall act that kept separated investment and commercial banking. In this way big companies can count on a permissive legislation that allows tax heavens, triangulations, transactions and workforce exploitation in low salaries’ countries, different from small and medium sized companies that cannot bear and international structure. 3. Privatization of State Owned banking and manufacturing companies and real estate. Owing the political and legislative sector, the financial conglomerates pursue a concentration in all economic activities starting from the banking and insurance sector, oil and energy complex, telecommunication and transport, raw materials, chemical, crop, farming and pharmaceutical sector, etc. These huge conglomerates often can have more revenues then single nations, bringing the market to be not free as it may appear, but ruled by an happy few group: an analysis of the relationships between 43,000 transnational corporations has identified a relatively small group of companies, mainly banks, with disproportionate power over the global economy. 4. The disinformation and dissimulation thanks to “penseé unique”. Simply avoiding to let the people be aware that State and not private banking system should issue money and the strategic sectors are the “golden goose” to get huge profits from, We the People remain unaware of the mechanism. The daily skillful wide spread on mainstream media of the “pensée unique“, the citizens of the so called “western democracies” come under the effects of this liberal system, which is   constructed to generate profits for the 1% by utilizing the hard work of the remaining 99%.
A PRO 99% MODEL OF DEVELOPMENT: THIRD WAY
A PRO 99% SYSTEM, “THIRD WAY” MODEL: 1. The State issues the money free from charge/debt and insert into economy.  For example after an earthquake or a calamity the State finance the reconstruction for the reconstruction of the houses, of the roads and highways, of the hydric system, of the sanitary system, etc. This can happen simply by issuing money and paying the real economy’s companies, manufacturing companies that produce earth moving machines and other materials, and to building companies that to the work. The wealth then goes in natural circulation to the economy, as it was done with the First New Deal by Roosvelt. The issueing of the money is free from debt, as the State has the Monetary Soverainity. 2. The banking and production system is based on a State Owned Enterprise (SEO) sovereign system, where the strategic sectors belong to public institutions. In this way the State owns a a golden share in the most profit making sectors, and the rest belongs to diffused shareholders. This was the model that made booming the “western countries” in the past decades… but starting with the briitish privatizations in the ’80s this model turned quietly to the neoliberalis. In Italy the glorious I.R.I., -that played a pivotal role in the Italian economic miracle of the 1950s and 1960s- became the biggest corporation  outside the USA, an economic colossus that accounted alone for 44% of all national Gross Domestic Product. Then IRI has been sold in pieces starting from 1993 to foreign private corporations, and silently dissolved inch by inch in 2000. Then its all manufacturing companies, in many cases technical jewels or with enourmous worth having huge assets formed by the contribution of generations of italian citizens, were spoiled and delocalizeted. This with the complicity and dissimulation of mainstream media, politicians and magistrature, enrolled in opaque associations backed by the “British Invisibles and happy few” who joined the “Britannia cruise“. All middle sized and small companies that useed to work as suppliers of the big SEO had to close and fire workers. The result is that the middle class is disappeared by the Coventration of whole industrial sectors, such as money (Ministry of Treasure‘s banks such as Banco di Napoli, BNL, Credito Italiano, Banca Commerciale Italiana), energy (ENI, Nuovo Pignone), steel (Ansaldo), chemical (Enichem, Ferruzzi Group, Montedison) transports (Autostrade), communications (Stet, Telecom, Italtel), automotive (Alfa Romeo, Innocenti).  The benefits of this privatization process moved right towards a cartel of central private banks, which issues money out of thin air and loans it to the public and private sector in change of an interest fee. Again an analysis of the relationships between 43,000 transnational corporations has identified this invisible private cartel, mainly banks, that drives the Market making it not as free as the mainstream media declare. So in the last 30 years the Model of Development switched from Entrepreneur State with Sovereign Funds and self issued currency (SEO of IRI galaxy and Lira), to a privatized region of a private market called United Europe.
NOW THE 1% IS WINNING AND 99% IS LOSING: HOW TO RESTORE THINGS

To sum up, in this complex economic environment, we as shareholders, basically face two options:

– play “neoliberistic” and have a “profit-attitude”: to disinterest ourselves with the local territory (referring to suppliers), the fact that businesses are closing, and think of our own interests,  ‘climbing on some bandwagon (corporation), which squeezes profits to the detriment of the majority of the citizens. Under this speculative logic, we shareholders allow the management to maximise our investment (a large dividend at a minor cost), independently from the way in which it is achieved (foreign suppliers of goods and capital, fiscal circumvention).

– Increase our “Thid Way” awareness and follow a “territorial logic“: to be disposed to having a minor return on invested funds, provided our small investments are divided in the interests of the enivironment, meaning territorial health and socio-economic well-being of our community.  Under this logic of “environmental economizers”, we shareholders can ask the management to employ national and local suppliers when possible, and to establish purchasing groups and agreements with free contracts with national companies in order to gain scale economies.

Maybe it is time now that we start to understand if it is better for us to follow the interests of the 1% or the interest of the 99%, and take consequent action. Remembering that We the People, Are the 99%.