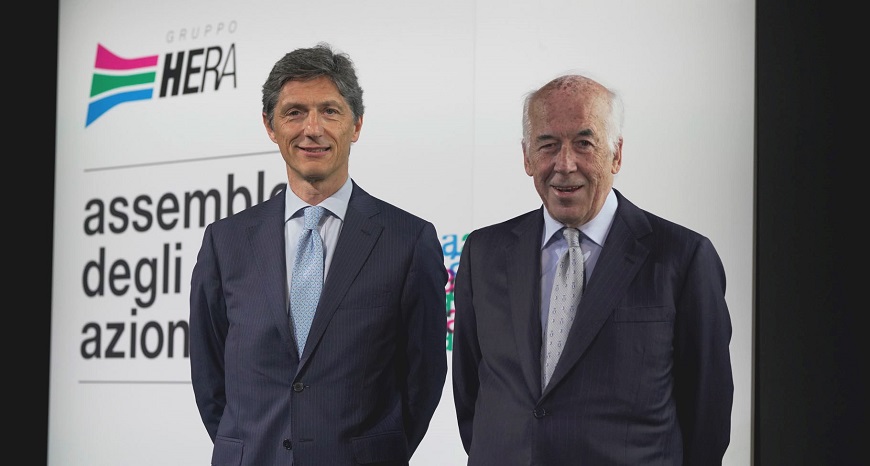 The Ordinary Shareholders Meeting is convened at the registered office of Hera S.p.A. – Viale C. Berti Pichat n. 2/4, Bologna – in the “Spazio Hera” area – on 30 April 2019 at 10:00 in a single call to discuss and resolve on the following:

The full text of the proposed resolutions, together with the related reports and the documents which will be put to the meeting, are available to the public at the company headquarters and on the Company website (www.gruppohera.it), as well as on the authorized storage website 1Info (www.1Info.it) under the legal terms foreseen for each of the subjects treated. 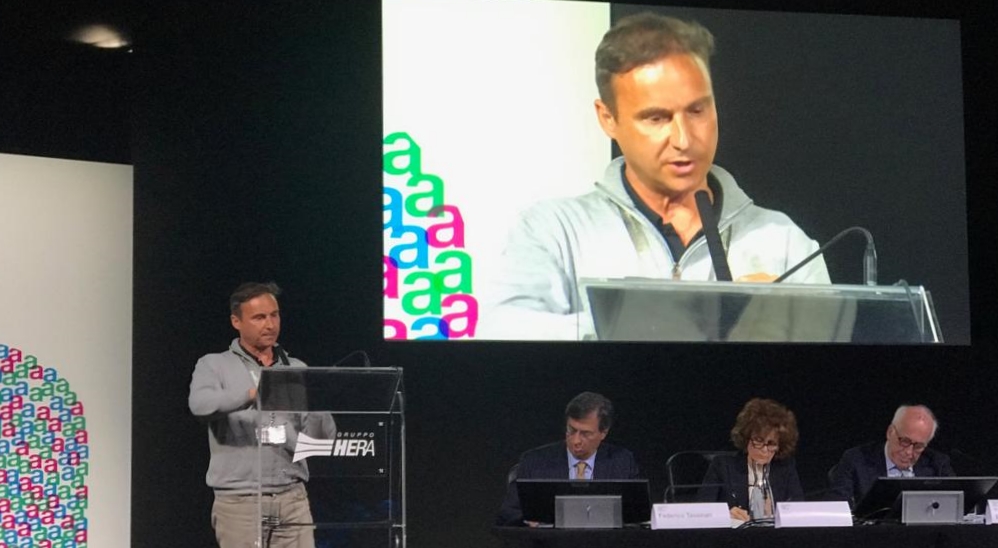 Thank you, Mr. President, good morning to you all,

I am Enrico Nannetti and I speak as a small saver shareholder and as a user as well. Forgive me if I also make critical remarks, hoping to be constructive, but I see here, present in the audience, in front of me, more mayors and first citizens than private shareholders. That is why I believe that the user’s point of view can also be considered.

I think it is impossible to try to make a judgment in 10 minutes on such a vast daily agenda, so I relaunch the proposal already made in the past: that the General Assembly can be preordained in several preparatory moments during the year, with a formally deliberative final moment, as it is today.

Concerning the profits’ issue, I would ask that the origin of the items that make up what is defined as useful, to be made out in the Budget. In fact, there are profits that come from a business activity containing the risk component, such as:

The difference resulting from the related cost centers, provides profits which I think can be considered as a civil code for the result of a business activity containing the risk of enterprise.

As these are understood as the voices that build what is described as useful in the budget, I wonder if they are properly so, once it is about the difference between the bills’ revenues and the vital public goods, distribution networks operating costs. On the one hand, it seems to me that the revenues are generated, for about 50%, by regulated contracts (i.e. with the p.a. and other bodies such as hospitals, barracks, kindergartens, etc., under a semi-monopoly/oligopoly regime), and, on the other hand, it seems to me that the costs of maintaining the networks are paid by law, at a net rate of 3-4%.

Therefore, if, on side, the revenue is “safe” and costs are covered by law [writer’s note: the others, the networks, could be covered by risk of breaking with insurance], I don’t understand how is it possible there can be a positive difference between revenues and costs, if there is no cost reduction of networks’ maintenance. Is this useful? Profits are usually generated in a production business, not in monopolies or oligopolies, rather, in businesses where there is a risk.

So, let me ask the property that sets the Development Guidelines and therefore the CDA whether the next financial year can be more clearly defined, distinguishing profits from business activities and those from items resulting from the difference between revenues and the network management costs. Therefore, I believe that, with such two dissonant voices, it is not possible to deliberate on the present agenda.

Especially because the present agenda, as already expressed in recent years, actually addresses two issues: budget approval and profit-distribution proposal; which, in my opinion, should be dealt with and decided separately.

In case is mandatory a public shareholder to speak, my question would be if there is any authority, such as the GSE, Energy Services Manager, that check that dividends distributed to municipalities do not end up in the budget items for current expenditure.

Concerning the sustainability issue, I wonder if, today, the company is not proposing a development model in which there is an obligation to grow. If the corporate perimeter would widen year after year, acquiring new assets brought into bank, as collateral effect, to obtain fresh resources to pay dividends, then, it would be justified policy, but, that it would lead to endless forced growth.

So, is the budget sustainable?

Depends on who. For private shareholders and creditor banks, it is certainly sustainable.

For the user’s community, I wonder if the private interest of shareholders has been mediated fairly. Let me remind you that, under the By Laws, the institutional mission has “the Purpose, in accordance with the principles of economics and profitability, and the confidentiality of company data, to promote competition, efficiency and adequate levels of quality in the delivery of services”.

In my point of view, considering only, for example, the part of water supply in fibrocement at the end of its life cycle, assuming it will take years before it is replaced, I believe that, today, to remain in this model of development, of sufficient debt growth, does not allow a scope to be broad enough for the budget to become sustainable for savers’ (non-speculators) shareholders and users.

In my humble opinion, in order to achieve fully sustainability for all, it would be necessary to enter the capital of a public majority bank. I will explain the proposal in the next speech.

OPINIONS CONCERNING ITEM 1 OF THE DAILY AGENDA : AGAINST

AGENDA POINT N..2 Presentation of the report on corporate governance and non-binding deliberation on remuneration policy.

I would like to go back to my previous speech, to reaffirm that, from my very modest point of view, the company must take a step forward in sign of Governance: a time shift step, equivalent to the automotive industry moving from to electric hybrid engine.

It is simply a question of establishing a set of Banks of National Interest, i.e. banks with a public relative majority, in coordination with Utilitalia and the Government, following the model of the German LandesBanken.  The Hera Group, which, under its By Laws, seems to be able to do, should simply enter the capital of a private public mixed bank. Maybe in cooperation – and not competing with – other multi-utilities of the Contiguous Optimal Territorial Area.

This is possible, due to the fact that article 123 of the Regulation on the Operation of Community Treaties, within the current banking legislation, the ECB can lend to the banking system, but not to the states or directly to public companies. So, entering into capital of a bank according to the model of the LandesBanken, would allow the bank to receive negative interest rate financing from the ECB as it does today, and turn them over to companies like the HERA Group, at much lower rates when compared to those currently offered by the private banking system.

By bringing the company assets to warranty, one could receive all the funding one needs to restructure networks. This is not a näive’s idea, but, rather, the result of hard work of both me and the Associazione Moneta Positiva (Positive Currency Association). All the arguments can be found at the www.azionehera.it and www.monetapositiva.it sites. Associazione Moneta Positiva (Positive Currency Association) is a school of economic education that studies the monetary dynamics based in Casalecchio di Reno, headed by Ing. Fabio Conditi, and as social media visionaire, fosters several hearings at institutional level including, the Senate of the Italian Republic.

Therefore, a Sustainable Budget not only for savers but also for users, is indeed possible if moving from a neoliberal development model based on debt capital, to a system that includes public banks that can create free currency interest expense.

In order to address the second aspect of the daily agenda, in the development model of the Third Way, based on the Entrepreneur State in the capital of banks and strategic companies such as the HERA Group, of course we would refer to the law that provides for a cap on salaries of the Public Directors at 240,000 euros. Again, I believe that the daily agenda should be narrowed down into two different daily agendas, one concerning Governance, the other on the remuneration of top management.

In summary, if Sustainability is given by the interaction between the Environment, Society and Economy (economy understood as a model of development that defines the rules of operational operation), I think it may be worth moving from a “market “logics – that concerns customers and tariffs – to a “Company” logics –  going back to the concept of users, but still working on the concept of fares (TA.RI). With fares, the relationship is contractual, between citizen and manager, while the Tax implies a right between public body and citizen, a legal relationship that, in my opinion, it shall not be lost.

To conclude, in order to have a GOVERNANCE that leads to a 99% Sustainable Budget, one must be on the side of the Entrepreneur State, and not on the side of the market: a multifaceted subject, with opacity traits that seems to favor interests at 1% over Collective interest.

AGENDA POINT N.3. Renewal of authorization to purchase own shares and how they are available: inherent and consequential deliberations. 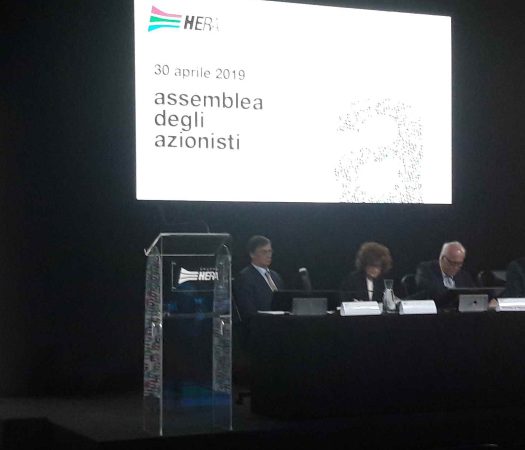